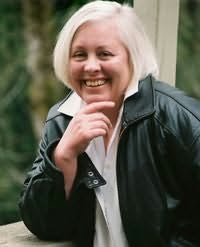 Karen L Azinger has always loved fantasy fiction, and always hoped that someday she could give back to the genre a little of the joy that reading has always given her. Eight years ago on a hike in the Columbia RiverGorge she realized she had enough original ideas to finally write an epic fantasy. She started writing and never stopped. The Steel Queen is her first book, born from that hike in the gorge. Before writing, Karen spent over twenty years as an internationalbusiness strategist, eventually becoming a vice-president for one of the world's largest natural resource companies. She's worked on developing thefirst gem-quality diamond mine in Canada'sarctic, on coal seam gas power projects in Australia, and on petroleum projects around the world. Having lived in Australia for eight years she considers it to be her second home. She's also lived in Canada andspent a lot of time in the Canadian arctic. She lives with her husband in Portland Oregon, in a house perched on the edge of the forest. The first four books of The Silk & Steel Saga have already been written and she is hard at work on the fifth and final book.
Series
Silk & Steel Saga
1. The Steel Queen (2011)
2. The Flame Priest (2011)
3. The Skeleton King (2012)
4. The Poison Priestess (2012)
5. The Knight Marshal (2013)
6. The Prince Deceiver (2014)
7. The Battle Immortal (2015)