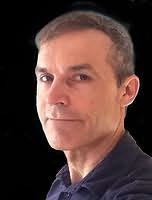 Canada (b.1959)
Lindsay Brambles was born in Ottawa, Canada in 1959. In 68 his father, an electrical engineer, signed on for a job overseas. Thus began a decade of living and traveling in countries such as Pakistan, Iran, and Tanzania.
After grade three, his formal education was largely through the Ontario Ministry of Education correspondence course. He has spent most of his post-academic life in a variety of unrelated jobs, ranging from construction to childcare, all while pursuing a vocation as an artist.When not engaged in the literary arts, painting, or earning money in less creative pursuits, Lindsay enjoys anything fitness related, collecting Gold Key comics and motion picture soundtracks, tinkering with computers, and just about anything that will expand his awareness of the world around him. Passionate about all science, he is especially interested in astronomy, cosmology, and quantum mechanics.Lindsay is at present busily working on several books, not least being the sequel and final novel in the Haven trilogy (of which Becoming Darkness is the first in the series).
Novels
Becoming Darkness (2015)