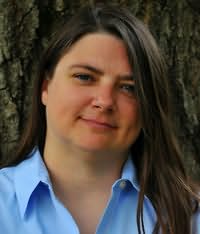 Marie Flanigan grew up all over the Commonwealth of Virginia as the youngest of three girls. Star Wars and comic books dominated her youth. She has a couple of degrees from George Mason University and is a licensed Private Investigator. Over the years, she’s been a disc jockey, a web developer, and a children's librarian. An avid gamer, she reviews video games for GameIndustry.com. After nine car accidents, five concussions, and brain surgery, she decided that perhaps she was more suited to a quieter life. She and her husband and three dogs live happily and somewhat chaotically outside of Washington DC. She can be found online at Mflanigan.com or on Twitter @Marie_Flanigan.
Series
Annie Fitch Mysteries
1. Exposed Fury (2018)
2. Hidden Fury (2021)