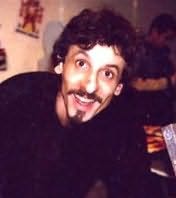 Italy (b.1967)
Massimiliano Frezzato is an Italian comic book author. Born in Turin, he studied art in that city and won the first Prize in the 1989 comics contest in Prato. In 1990 he started the series Margot, written by Jerome Charyn.

His most famous work is I custodi del Maser (Keepers of the Maser), which appeared in 1996 and has been translated in numerous countries, including France, Belgium, United States, Germany and Denmark.