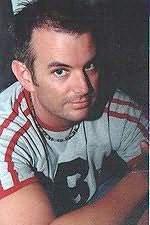 (b.1967)
Victor Heck, born David Nordhaus, in St. Louis, Missouri, is an American editor and horror fiction author whose novels and short stories are published under his pen name. He is the former owner/operator of DarkTales Publications.In 1999, Heck's The Asylum Volume 1: The Psycho Ward was nominated for the British Fantasy Award for Best Anthology.
Novels
A Darkness Inbred (2000)
Book of Legion (2006)