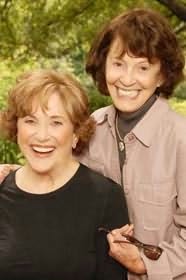 Cady Kalian is the pseudonym for two Hollywood icons: Irma Kalish, an award-winning television writer with more than three hundred scripts to her credit and a past vice president and board member of the Writers Guild of America, west, and Naomi Gurian, an attorney and former executive director of the Writer's Guild of America, west.
Series
Maggie Mars
1. As Dead as It Gets (2006)
2. A Few Good Murders (2007)