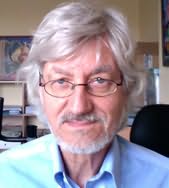 Ireland (b.1949)
Husband of Christina McKenna
David M. Kiely was born in 1949 in Dublin. In 1974 he settled in the Netherlands, where he worked for two decades in advertising, both as a designer and copywriter. He returned to Ireland in 1991, and set about writing "for real". His first published work was a biography of dramatist John Millington Synge. Fiction followed, as well as a number of non-fiction commissions. In 2006 he published a book on true-life exorcism, co-authored with his wife, Christina McKenna. Harper published American editions in 2007/2008. He is at present working on an unusual history of worldreligions.

Collections
A Night in the Catacombs (1995)