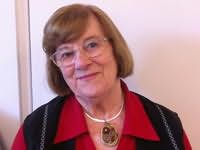 Elizabeth writes mostly family sagas, set in the East End of London where she was born. Twice widowed, Elizabeth now lives in Billericay, Essex. She began her writing career with short stories published in various magazines during the 1970s.

In the late 1980s she turned to writing novels, her first being published in 1992 with Piatkus Publishing Ltd, London and has now had eighteen novels published, selling in Australia, New Zealand, Canada, as well as Europe and her most recent ones by Severn House Publishers Ltd with an office in New York, USA, are now sold in the USA as well. Her latest book, TO CAST A STONE, is about a girl's search for her father in order to exact revenge on him for what he did to her as a child of fifteen. The book came out in May of this year and like all her others can be found in all the libraries as well as libraries across the USA. In addition to family sagas, Elizabeth Lord writes historical faction.
Series
Lett Family
Butterfly Summers (2000)
Autumn Skies (2001)
Winter Wine (2001)