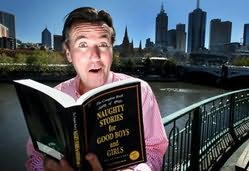 Australia (b.1950)
Chris Milne is an Australian actor and award winning writer who has scripted numerous episodes of Prisoner and Neighbours, as well as appearing on the shows as a performer. He also played the character of Philip Martin on the Australian soap opera Neighbours in 1985 and Ben Mazzini in Water Under The Bridge. He has written best-selling children's books (ages 613) for many years and his Naughty Stories for Good Boys and Girls is a winner of The Young Australians Best Book Award. He recently recorded 13 stories for The BBC in London and his books are regarded worldwide as "the perfect books for reluctant readers".