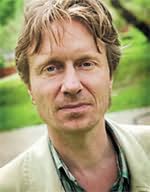 Sweden (b.1963)
Bengt Ohlsson (b. 1963), has since his critically acclaimed debut in 1984 risen steadily to become one of Sweden's most celebrated younger novelists. He is also a playwright and much-loved columnist in Dagens Nyheter, where his writing has appeared for some twenty odd years. Following his public breakthrough in 2000 with Se till mig som liten är, a painful account of a child's exposure in the face of divorce, Bengt Ohlsson recently won Sweden's premier literary award, The August Prize, for his novel Gregorius. The same novel was shortlisted for The Independent Foreign Fiction Prize 2008 and longlisted for The 2009 IMPAC Award. Bengt Ohlsson lives in Stockholm.
Novels
Gregorius (2007)