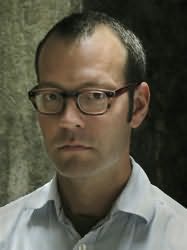 Jeffrey Rotter holds an MFA from Hunter College where he studied under Peter Carey, Colson Whitehead, Colum McCann, and Andrew Sean Greer and was awarded the Hertog fellowship to perform research for Jennifer Egan. He lives in Brooklyn with his wife and young son. The Unknown Knowns is his first novel.
Novels
The Unknown Knowns (2009)
The Only Words That Are Worth Remembering (2015)