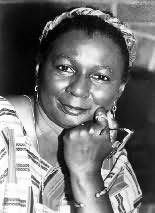 (b.1948)
Acclaimed author Eleanora E. Tate feels strongly about creativity. "A nation survives by the creativity of its people who perpetuate the arts. When the arts decline, the nation declines; when the arts flourish, the nation flourishes". The essential thing, she believes, is "telling your message to the world".

Ideas come to her from many sources. Her novel The Secret of Gumbo Grove sprang from a three-part series of articles that Tate wrote for The Charleston Chronicle. It is about an old, weedy cemetery in Myrtle Beach where many of the resort's African American founders are buried. The Secret of Gumbo Grove is part of Tate's trilogy of books set in fictional Calvary County on the coast of South Carolina. Its sister books are A Blessing in Disguise and Thank You, Dr. Martin Luther King, Jr.!

Also a journalist, Tate comes from Canton, Missouri, and has written professionally for over 30 years. She is a former president of the National Association of Black Storytellers, Inc. Tate is married to photographer Zack Hamlett, III, and they live in Morehead City, North Carolina.

Tate's book, Don't Split the Pole: Tales of Down-Home Folk Wisdom, is an engaging collection of short stories affirming that a little common sense can go a long way. The stories illustrate the often hilarious and inspiring truth behind such nuggets of folk wisdom as "A hard head makes a soft behind" and "What goes around comes around."