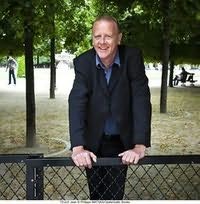 France (b.1953)
Jean Teulé lives in the Marais with his partner, the French film actress Miou-Miou. An illustrator, filmmaker and television presenter, he is also the prize-winning author of more than ten books including one based on the life of Verlaine. He has also written biographies of Rimbaud and François Villon. Gallic Books has published three of Teulé’s novels: the black comedy The Suicide Shop and two novels based around true historical events: the terrifying Eat Him If You Like and bawdy tragi-comedy of betrayal at Versailles, The Hurlyburly's Husband.
Novels
The Suicide Shop (2008)
Monsieur De Montespan (2011)
Eat Him if You Like (2011)
The Hurlyburly's Husband (2013)
The Poisoning Angel (2014)