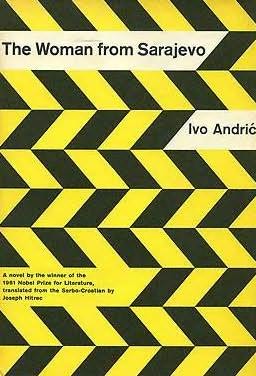 The Woman from Sarajevo

This novel by Andri was originally published in Serbian in 1945 and is one of the three novels that make up the "Bosnian Trilogy". The other two are "Bosnian Chronicle" and "The Bridge on the Drina". The novel is set in the cities of Sarajevo and Belgrade dyring the first three decades of this century. The places and time are not incidentally chosen. Ivo Andri is from Bosnia and knows the people and their problems in this unique area. The theme and composition suggest a work of modern classicism. It is the tragic life of a woman disappointed in people and in the world she lives in. She is completely enslaved by money, in which she hopes to find security and revenge in a hateful and insecure world. At the same time she is literally and feverishly following her bankrupt father's last plea, as she becomes not only thrifty but a real miser in a classical Gogolian style. This novel is dominated by a single character, a spinster named Miss Raika Radakovi who is dominated by a single passion, stinginess. The development of this passion is traced through the first third of this century, from the time Miss Raika's dying father, a ruined merchant, solemnly enjoins his school-girl-daughter to guard with her life the little property he can leave her, until some thirty-five years later when she herself dies, a scrawny old woman, unloved and unlovable, but faithful to her trust. As a moneylender she parlays small insurance legacy after her father into a small fortune. But whatever her wealth at any time, she will spend none of it on herself. For this single-minded greed for money she puts everything else out of her life - love, friendship, concern for other people. Raika also speculates in currencies during the tumultuous years of the Austro-Hungarian Empire and the uncertain emergence of the new Yugoslav state. A good deal of the power of Andri's tale comes through the depiction of this seething historical background.

Used availability for Ivo Andric's The Woman from Sarajevo