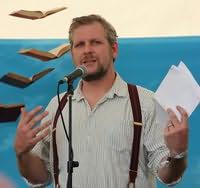 Matthew De Abaitua was born in Liverpool in 1971. After graduating from the University of East Anglia Creative Writing MA, he worked as Will Selfs amanuensis in a remote Suffolk cottage. Then he fell into writing and editing for The Idler. He wrote and presented a low-budget documentary series about British science fiction for Channel 4 called SF:UK.

His second book was a non-fiction memoir and history, The Art of Camping: The History and Practice of Sleeping Under the Stars, published in 2011 by Hamish Hamilton and Penguin. The Economist described it as one of the books of the year.  He is currently writing his next novel If Then set in a British market town of the near future and in the First World War. It features Dr Easy and a couple of minor characters from The Red Men.
Series
Seizure Trilogy
1. The Red Men (2007)
2. If Then (2015)
3. The Destructives (2016)