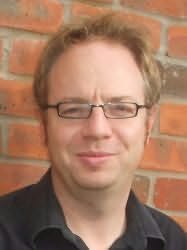 James Brydon grew up in North Shropshire and read English and Modern Languages at Oxford, graduating with a First in 2002. He has lived in several different countries including China, Hungary and Serbia and is a frequent visitor to Belgrade, the home city of his wife.

Between periods abroad, he completed a doctorate focusing on representations of war in twentieth-century French literature. He has published articles in English and French on various writers, including Jean-Paul Sartre, examining how conceptions of the events of World War Two influenced literary narratives. He is especially interested in the intersections of literature and history, and has now moved from academic writing to fiction, exploring the traumatic and contested past of post-war France.

For over a decade, he has worked as a cryptic crossword setter. As Picaroon, he sets two puzzles a month in the Guardian, and he compiles for the Spectator, the Times and the fiendish Listener puzzle, drawing inspiration for themes from sources as diverse as the films of Akira Kurosawa and the six-fold symmetry of snowflakes.

He is an enthusiastic linguist. Aside from French, he is fluent in Serbian, is currently polishing his German, and can hold a conversation in passable Chinese. He lives in St Albans with his wife and three-year-old daughter.