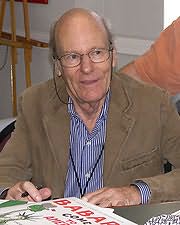 France (b.1925)
Laurent de Brunhoff is an author and illustrator.After studying fine arts at the Académie de la Grande Chaumière in Paris, de Brunhoff took over the Babar series of books first begun by his father, Jean de Brunhoff. After the war, he also did work in other creative fields, such as posters, jackets for record albums, and animated cartoons.

Since 1985, he has lived in the United States, splitting his time between Middletown, Connecticut and Key West, Florida. He is married to the writer Phyllis Rose.

Visitors to this page also looked at these authors
Stella Rimington