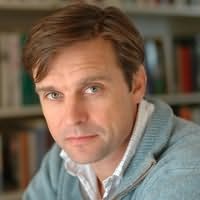 Richard Beard is the author of five novels. X20 (Flamingo 1996) is about a man giving up smoking: every time he wants a cigarette, he writes something down instead. Damascus (Flamingo 1998) is a love-story set on a single day, 1 November 1993, and all the nouns in the novel come from that days edition of The Times newspaper. The Cartoonist (Bloomsbury 2000) is a novel set in and around Disneyland Paris, in which libel and copyright restrictions prevent the characters from ever entering the Disneyland theme-park.

Dry Bones published by Secker and Warburg in February 2004 , is a rollercoaster philosophical journey of Stoppard-like brilliance. (Glasgow Herald).

After studying at Cambridge, Richard Beard worked in Hong Kong and at the Dragon School in Oxford, as a P.E. teacher. After a year as Private Secretary to Mathilda, Duchess of Argyll, Beard moved to Paris where he worked at the National Library while continuing his studies with the Open University. In 1994, he enrolled on Malcolm Bradburys Creative Writing MA at the University of East Anglia, followed by two years in Geneva.
Series
Messiahs Trilogy
1. Lazarus Is Dead (2011)
2. The Apostle Killer (2015)