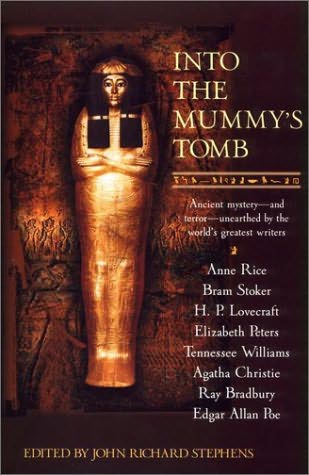 Into the Mummy's Tomb

(1989)
An anthology of stories edited by John Richard Stephens

"The Mummy." The first things that come to mind are the curse...reanimation...and revenge. But what further mysteries are to be unwrapped in the tombs of the Ancient Egyptians? And what horrors still lie buried in the imaginations of the immortal talents who have explored this realm of the fantastic? In this thrilling anthology, writers as diverse as Anne Rice (unveiling a chilling excerpt from her novel The Mummy or Ramses the Damned), Tennessee Williams (in his first published piece), Louisa May Alcott (at her most unexpectedly startling), and an actual Egyptian priest (penning his tale in 300 B.C.), venture Into the Mummy's Tomb for tales of the undead that have survived for eternity in nightmares of the living.

Used availability for John Richard Stephens's Into the Mummy's Tomb