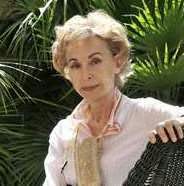 Spain (b.1937)
Elena Castedo wrote her first novel, Paradise, after she had become a grandmother, and in an adopted language, English. To her great surprise, it became a critical success, a finalist for the National Book Award and required reading in many university English departments. Her own self-translation into Spanish, published in five countries, won Chiles Book of the Year award and was a best seller in Spain and Chile for a year.


A refugee from Franco's Spain in France, an exile in Chile, an immigrant in the US., presently a nomad living in Boston, Key West, Paris and Madrid, I have seen a lot; war, detention camps, poverty, tragedy, and also triumph born from optimism and stubborn perseverance.

As a kid I read international childrens literature, such as Babar. In high school I read mostly contemporary Spanish, Chilean and Latin-American literature. Later I read international authors, mostly US, French and German in Spanish translation. I majored in Spanish and Latin-American literature. Much later I started reading in English, including many of the books I had originally read in Spanish. Beckett and Nabokov were an inspiration, and so I decided to self-translate my work, written in English, into Spanish. There are too many authors that I feel have influenced me to list them.
Novels
Paradise (1990)