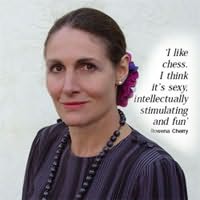 Rowena's youth was spent on the tiny British island of Guernsey: a mystical, idyllic setting with its prehistoric earth-goddess, historic Martello towers, underground gun emplacements, and legends of faery men emerging from a cleft in the Hommet Headland to mate with human women.

A school chess champion and winner of the Duke of Edinburgh's Gold Award, Rowena went to ancient Cambridge University for her four-year combined honors degree in English and Education, after which she taught at exclusive boarding schools, first in Dorset, then in London.

Eventually Rowena met and married her auto designer husband, who whirled her off to Germany to live the glamorous life of an alien abroad.

Reassigned to America, she rode in pace cars at the Indy 500 and Brickyard and has flown in corporate jets to exotic locations. Her life so far has been fantastic inspiration for romance novel scenes and alien-world building.