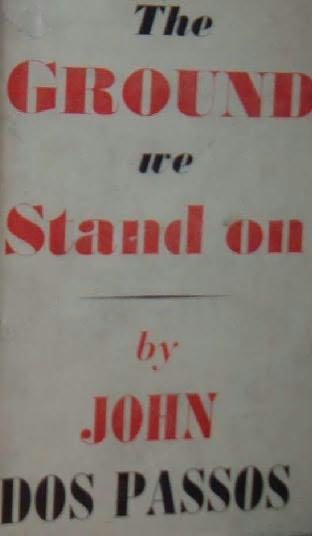 The Ground We Stand On

Every generation rewrites the past. In easy times history is more or less of an ornamental art, but in times of danger we are driven to the written record by a pressing need to find answers to the riddles of today. We need to know what kind of firm ground other men, belonging to generations before us, have found to stand on. In spite of changing conditions of life they were not very different from us. This is a prime example of Dos Passos as an American novelist and reporter on American reality.

In times of change and danger when there is fear under men's reasoning, a sense of continuity with generations gone before can stretch like a lifeline across the scary present. That is why, in times like ours, when old institutions are caving in and being replaced by new institutions not necessarily in accord with most men's preconceived hopes, political thought has to look backwards as well as forwards. It is not a question of what we want; it is a question of what is. American history, the successes and failures of the men who went before us, is only alive in so far as some seeds are still stirring and growing in us today.

Divided up into three major sections: The Use of the Past, Roger Williams and the Planting of the Commonwealth in America, and On the White Porch of the Republic; The Ground We Stand On traces the backgrounds and the rise of America's early political structure, the variety of influences upon it, and the men who gave it a stable foundation.


Used availability for John Dos Passos's The Ground We Stand On