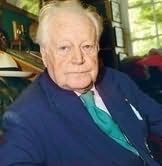 France (1918 - 2009)
Maurice Druon was a French resistance hero, a Knight of the British Empire and a holder of the Grand Croix de la Légion d'Honneur. He was also a member of the Académie fran&#231aise and a celebrated novelist, best known for his series of seven historical novels under the title of The Accursed Kings, which were twice adapted for television. A passionate Anglophile, he was a great expert on all things English, including its medieval history, which provides great inspiration for the series. His many and diverse fans include George RR Martin, Nicolas Sarkozy and Vladimir Putin.