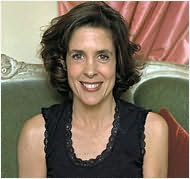 (b.1960)
Fernanda Eberstadt is an American writer.

She is the daughter of two patrons of New York City's avant-garde, Frederick Eberstadt, a photographer and psychotherapist, and Isabel Eberstadt, a writer. Her paternal grandfather was Ferdinand Eberstadt, a Wall Street financier and adviser to presidents; her maternal grandfather was the poet Ogden Nash. At age eighteen she moved to the United Kingdom where she studied at Magdalen College, Oxford.
Novels
Low Tide (1985)
Isaac & His Devils (1991)
When the Sons of Heaven Meet the Daughters of the Earth (1997)
The Furies (2003)
Rat (2010)