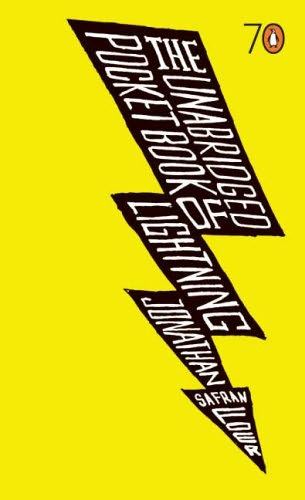 The Unabridged Pocketbook of Lightning

(2005)
A Chapbook by Jonathan Safran Foer

Every book tells a story . . . And the 70 titles in the Pocket Penguins series are emblematic of the renowned breadth and quality that formed part of the original Penguin vision in 1935 and that continue to define our publishing today. Together, they tell one version of the unique story of Penguin Books. Widely acknowledged as one of the most inventive new voices in contemporary fiction, Jonathan Safran Foer is proof of Penguin's ongoing commitment to finding and publishing the bravest new writing. Safran Foer's debut, Everything is Illuminated, won the Guardian First Book Award in 2002, and The Unabridged Pocketbook of Lightning is packed with the wit, imagination and exuberance that make his work essential reading.