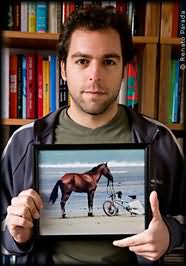 Brazil (b.1979)
Daniel Galera is a Brazilian writer, translator and editor. He was born in São Paulo, but was raised and spent most of his life in Porto Alegre, until 2005 when he went back to São Paulo. He is considered by critics to be one of the most influential young authors in Brazilian literature. Daniel is one of the founders of the publishing house Livros do Mal and had some of his works adapted into plays and movies.
Novels
Blood-Drenched Beard (2014)
The Shape of Bones (2017)
Twenty After Midnight (2020)