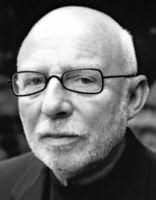 Belgium (b.1930)
Jef Geeraerts is a Flemish writer. He was a colonial administrator in Belgian Congo. On the independence of the Congo he sent his wife and children back to Belgium and in August 1960 he himself returned to Belgium. During the next six years he was paid by the government (return program). After that time he needed to find a job to survive. He decided to become a writer and went to the University of Brussels to study Germanic languages.
Novels
The Public Prosecutor (2009)