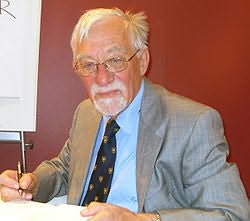 Sweden (b.1936)
Lars Gustafsson is a Swedish, poet, novelist and scholar. He was born in Västerås, completed his secondary education at the Västerås gymnasium and continued to Uppsala University; he received his Licentiate degree in 1960 and was awarded his Ph.D. in Theoretical Philosophy in 1978. He lived in Austin, Texas until 2003, and has recently returned to Sweden. He served as a professor at the University of Texas at Austin, where he taught Philosophy and Creative Writing, until May 2006, when he retired. In 1981 Gustafsson converted to Judaism.
Novels
The Death of a Beekeeper (1981)
The Tennis Players (1984)
Sigismund (1985)
Funeral Music for Freemasons (1987)
Bernard Foy's Third Castling (1988)
A Tiler's Afternoon (1993)
The Tale of a Dog (1998)