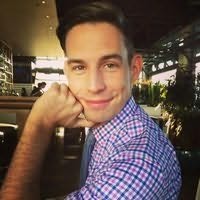 Aaron Hartzler is the author of Rapture Practice (Little, Brown), a memoir about getting kicked out of his Christian high school two weeks before graduation. The New York Times called Rapture Practice "effervescent and moving, evocative and tender." It was also named one of Kirkus Reviews and Amazon's Best Books of 2013, and was a finalist for the Lambda Literary Award. His next book, a novel called What We Saw, will be published by HarperTeen on September 22, 2015. It's the story of a girl named Kate whose friend is assaulted by student athletes at a party, and how Kate navigates small town politics to find out what really happened. Aaron lives by the beach in Santa Monica with his two dogs, Charlie and Brahms. You can find him on Twitter and Facebook.
Novels
What We Saw (2015)