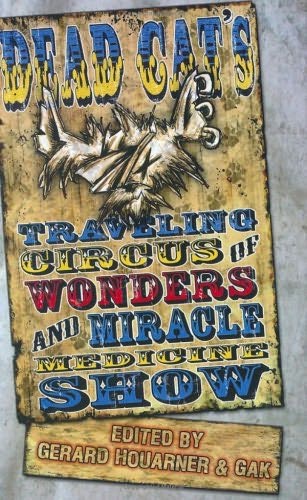 You threw away the kitty litter, didn't you. But that's okay, he doesn't need it. Don't bother running out for a bag of cat chow, the stuff falls right out of him. Afraid of fleas in his fur? They're afraid of him! He's dead, but he's back, and he's looking for you! Don't think spending a few thousand years buried in sand can keep Dead Cat down. He's gone through Hell to come back because he knows you can't live without him!

Break out the surgical tape for those mummy wrap malfunctions. Fluff up the old comfy pillow, find a nice, sunny spot by the window and settle down with Dead Cat, GAK, and sixteen twisted horror writers who enjoy playing with dead things for the finest Circus of Wonders and Miracle Medicine Show you'll ever experience. Dead Cat guarantees your satisfaction!

Remember, Dead Cat came back from the dead for you! It's not wise to ignore the dead...