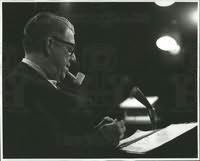 (1914 - 1984)
Harry Homewood was a qualified submariner before he was seventeen years old, having lied to the U.S. Navy about his age. He served in a little "S"-boat in the old Asiatic Fleet. After Pearl Harbor, he re-enlisted and made eleven war patrols in the Southwest Pacific.

After the war, Homewood became Chicago Bureau Chief for Newsweek magazine, chief editorial writer for the Chicago Sun-Times, and for eleven years had his own weekly news program syndicated to 43 PBS television stations.

Homewood was the author of 6 books and lived with his wife in Tucson, Arizona, until his death in 1984.