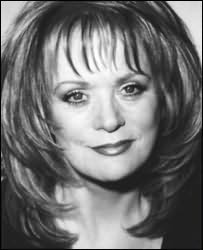 (b.1950)
Sherrie Hewson is an English actor and television presenter. She was brought up in a showbusiness family; her father was a singer and her mother a model. Sherrie began performing at the age of six, touring the UK's theatres in revues with her own signature song, "You've Got to Have a Heart". At the age of fifteen, she won the prestigious Olivier Award for Best Newcomer, and two years later, was granted a scholarship to attend RADA. Upon graduating, Sherrie won seven major awards, including Best Actress and Best Comedy Actress. In March 2008, Sherrie took part in the BBC reality show Murder Most Famous and was declared the winner. She won the opportunity to write her own crime fiction novel, The Tannery, which will be published in 2009 by Pan Macmillan as one of their 'quick reads', published annually as part of the World Book Day celebrations.

Sherrie has one daughter, Keeley (b. 1984), from her marriage to Ken Boyd, and a grandson named Oliver (b. 2006). She has professed to having a passion for Thai cuisine which forms an integral part of her diet.
Series contributed to
Quick Reads 2009
The Tannery (2009)