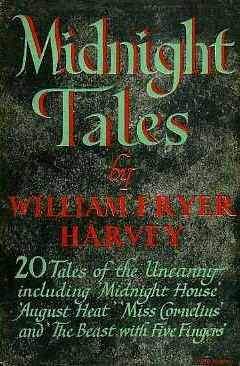 Twenty tales of the uncanny by W.F. Harvey (1885-1937), many of which are of a violent and horrific nature, selected by Maurice Richardson from the three volumes of Harvey's previous collections of short stories: "Midnight House" (1910), "The Beast with Five Fingers" (1928) and "Moods and Tenses" (1933). The twenty tales are arranged in an order which is intended to build up to two climaxes, one in the middle and one at the end. In the middle is 'Miss Cornelius', in the editor's opinion Harvey's best, with the story of two other psychological cases, 'Mrs Ormerod' and 'Miss Avenal', respectively well before and after. At the beginning is the atmospheric little tale 'Midnight House', at the end the now famous horror-piece 'The Beast with Five Fingers' and in between are stories which might come under different sub-classifications of uncanny fiction: the truly ghostly, the psychologically abnormal, and the plainly fantastic. All are written with the quiet, effortless art which gives Harvey's work its unfailing realism, and this concentrated collection should give pleasure to all who like to be disturbed and even frightened. The book includes an introduction by the editor Maurice Richardson which gives a short account of Harvey's life and work, together with an appreciation and critique of ghost stories in general and of Harvey's stories in particular.