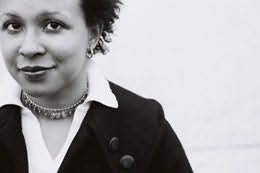 Jemiah Jefferson was born in Denver, Colorado. Her childhood consisted of a steady diet of AM radio, New Wave and disco, music videos, Star Wars, and resenting the strictures of school. At an age too early to remember, she began making up stories populated by vivid characters. Combined with a compulsive urge to write commentary and reactions in the margins of books she read and re-read, she found that these increasingly-complex stories demanded to be written down.

The first draft of the novel that would become Voice of the Blood was written in 24 hours in 1990 in a fit of inspiration. After another six years of thinking about it (and writing a few more novels and short stories in the meantime) she finally began to apply herself to this work, taking her experiences of living in San Francisco and of her contacts with the young, amoral, and beautiful that she had there and applying them to a situation and a set of characters already in existence in her imagination.

She works in the editorial department at Dark Horse Comics, Inc., working on titles including Emily the Strange, Creepy Archives, The Complete K Chronicles, and the Eisner Award-winning Herbie Archives.