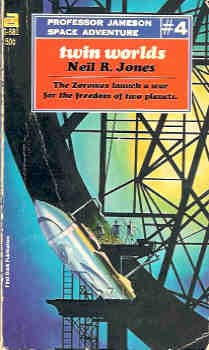 When the star-traveling machine men of Zor discovered the twin-world system of Dlasitap, they thought it only a curious astronomical phenomenon. But when they landed on one of those planets, they discovered a world ruled by harsh tyranny, and encountered the rightful leader of these two worlds, who was now confined in exile. the Zoromes' fight to overthrow the double-planet usurpers is an exciting tale of action and boundless imagination that ranks with the best of the famous Professor Jameson series.