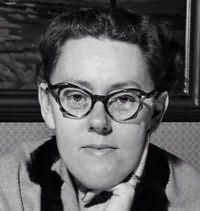 Sweden (1914 - 1991)
Dagmar Lange was a Swedish author of crime fiction under the pen name Maria Lang. She was one of the first detective novelists in the Swedish language, and her books helped make the genre popular in Sweden. Her first novel, "Mördaren ljuger inte ensam," was published in 1949 and caused some controversy because two of the main characters lived in a homosexual relationship. The book was given a positive review by Barbro Alving in Dagens Nyheter.

Lange wrote more than 40 detective novels, as well as crime fiction for young adults. Most of her books are set in the fictional Swedish town Skoga, which is based on Lange's home town Nora. She was one of the original 13 members of the Swedish Crime Writers' Academy when it was founded in 1971.