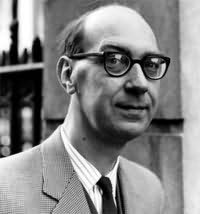 (1922 - 1985)
Philip Arthur Larkin, CH, CBE, FRSL, was an English poet, novelist and jazz critic. He spent his working life as a university librarian and was offered the Poet Laureateship following the death of John Betjeman, but declined the post. Larkin is commonly regarded as one of the greatest English poets of the latter half of the twentieth century. He first came to prominence with the release of his third collection The Less Deceived in 1955. The Whitsun Weddings and High Windows followed in 1964 and 1974. In 2003 Larkin was chosen as "the nation's best-loved poet" in a survey by the Poetry Book Society, and in 2008 The Times named Larkin as the greatest post-war writer.
Novels
Jill (1946)
A Girl in Winter (1947)