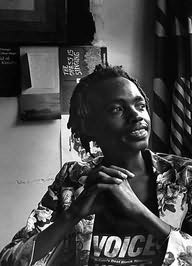 Zimbabwe (1952 - 1987)
Known as the "enfant terrible of African literature" and "Africa's response to Joyce", Dambudzo Marechera (1952-1987) has been dismissed by some as mad and applauded by others as a genius. More than twenty years after his death, his work continues to inspire academic studies, biographies, films, and plays. Famous for his unconventional life as much as for his work, Marechera has become something of a cult figure in certain circles in Zimbabwe, a country whose political developments have fulfilled his prescient political vision. The annual "The House of Hunger Poetry Slam", which takes place in The Book Café in Harare every June, is a witness to the enormous influence Marechera continues to wield over Zimbabwean writers. Among his many followers and admirers are the Zimbabwean praise poet Albert Nyathi, the South African performance poets Lesego Rampolokeng and Kgafela oa Magogodi, or the Zimbabwean rapper Comrade Fatso.
Novels
Black Sunlight (1980)
Mindblast (1984)