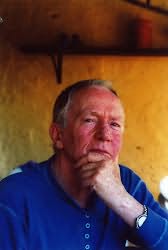 Fiji (b.1929)
Kenneth McKenney was born in Fiji and grew up surrounded by the sea. Later, while studying geology at Auckland University he discovered the wonders of skin diving, the magic that lies beneath the waves. After graduation he worked as a geologist searching for copper in the Australian Outback and mining for gold in his native Fiji. None of this satisfied, so he left rocks and tunnels behind him to become a copywriter in the world of advertising. From copywriter he progressed to producer-director of TV commercials, travelling from Finland to Venezuela.
McKenney began scribbling poems and short stories at university, some of which were published. Then his one-act play, The Escape of Harry Springer, won the New Zealand British Drama Award, and his first novel was published in London. On receipt of a grant from the New Zealand Literary Fund he went to London, where he pursued his advertising career, writing all the while.