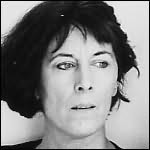 (b.1948)
Pauline Melville is a Guyanese-born writer and actress. She now lives in London.

She appeared in films such as Mona Lisa (playing the part of Dawn), as Dora in The Long Good Friday, among others. She also appeared in television programmes: as Vyvyans's mother in the BBC Television comedy series The Young Ones; as Yvonne in Girls On Top, among others.