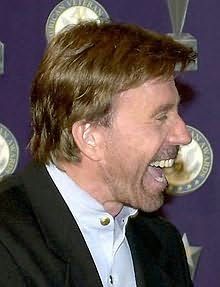 (b.1940)
Carlos Ray "Chuck" Norris is an American martial artist, actor and media personality. After serving in the United States Air Force, he began his rise to fame as a martial artist and has since founded his own school.Norris appeared in a number of action films.Norris is a devout Christian and politically conservative. He has written several books on Christianity and donated to a number of Republican candidates and causes. In 2007 and 2008, he campaigned for former Arkansas Governor Mike Huckabee, who was running for the Republican nomination for President in 2008. Norris also writes a column for the conservative website WorldNetDaily.