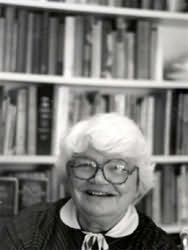 (1917 - 1992)
Born in Washington D.C.
Pope later graduated from Bryn Mawr College and then earned her Ph. D. in English literature from John Hopkins University. Next she began teaching at Mills College in Oakland, California and remained there for many years. Beginning as an assistant professor and moving up to hold the position of professor and chairman of the department, Pope excelled as an instructor. Also an author, Pope concentrated mostly on Milton, Shakespeare, and Elizabethan England, and she traveled abroad in order to do historical research for her book The Perilous Guard which was selected for the Newbery Honor Book Award in 1975. Pope passed away in 1992.