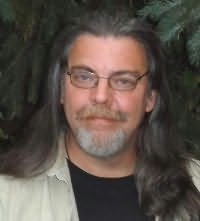 Michael 'Tinker' Pearce lives in Seattle with his wife and co-author Linda. He got the nickname 'Tinker' in the 1980's when he was at various times a soldier, college student, a bodyguard, a private investigator, a meat-carver at a restaurant, a police officer, an illustrator, heavy equipment operator, competition shooter, cover-copy writer, outlaw road-racer, Drill Instructor Candidate, receptionist, executive assistant to the heads of corporate banking at Citycorps, Tobacconist, courier for a currency exchange etc.

He finally settled down to become a knife and sword maker, specializing in the blades of medieval Europe and the Viking Era. He is the author of 'The Medieval Sword in the Modern World,' and the designer of the CAS Iberia Tinker Line of medieval swords and trainers. He is a trained theatrical fighter and choreographer, and a student of Historic European Martial Arts. He co-authored the Foreworld novella 'The Shield Maiden' and the couple released their first novel 'Diaries of a Dwarven Rifleman' in early 2013. They released a sequel novella, 'Diaries of a Dwarven Rifleman: Rear Guard' in September 2013. Their second Foreworld Novella 'Tyr's Hammer' was published in October 2013.

The couple has just released their second novel, 'Rage of Angels,' a hard-science military science-fiction story based on the events in 'The Killing Machine' and 'What Happens in Dubai.' Future projects include the full-length sequel to 'Diaries of a Dwarven Rifleman,' 'Lord of the North' and the Contemporary Fantasy "The Gray Man's Journal.'

Non fiction
The Medieval Sword in the Modern World (2013)