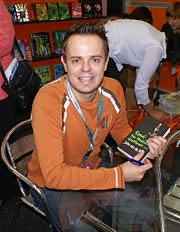 South Africa (b.1975)
John Howard van de Ruit is a South African novelist, actor, playwright and producer. He has been a professional actor, playwright and producer since 1998. He was born in Durban and educated at Michaelhouse, where he stayed in Founders House and from where he matriculated in 1993. He then went on to complete a Masters degree in Drama and Performance at the then University of Natal.

He is best known for his collaboration with Ben Voss on the satirical sketch show Green Mamba which has toured extensively throughout Southern Africa since 2002. His first novel was published in 2005 by Penguin, entitled Spud. The book was a runaway success in South Africa. It won the 2006 Bookseller's Choice Award. The sequel Spud- The Madness Continues... was released in mid 2007. Ruit has also sold the film rights to the book, and shooting will begin in 2008.