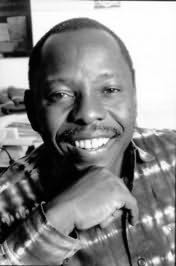 Nigeria (1941 - 1995)
Kenule "Ken" Beeson Saro Wiwa was a Nigerian writer, television producer, environmental activist, and winner of the Right Livelihood Award and the Goldman Environmental Prize.
Saro-Wiwa was a member of the Ogoni people, an ethnic minority in Nigeria whose homeland, Ogoniland, in the Niger Delta has been targeted for crude oil extraction since the 1950s and which has suffered extreme environmental damage from decades of indiscriminate petroleum waste dumping. Initially as spokesperson, and then as President, of the Movement for the Survival of the Ogoni People (MOSOP), Saro-Wiwa led a nonviolent campaign against environmental degradation of the land and waters of Ogoniland by the operations of the multinational petroleum industry, especially the Royal Dutch Shell company.
He was also an outspoken critic of the Nigerian government, which he viewed as reluctant to enforce environmental regulations on the foreign petroleum companies operating in the area.
At the peak of his non-violent campaign, Saro-Wiwa was arrested, hastily tried by a special military tribunal, and hanged in 1995 by the military government of General Sani Abacha, all on charges widely viewed as entirely politically motivated and completely unfounded. His execution provoked international outrage and resulted in Nigeria's suspension from the Commonwealth of Nations for over three years.
Series
Adventures of Mr B.
1. Mr. B. Goes to Lagos (1989)
2. The Transistor Radio (1989)
3. Segi Finds the Radio (1990)
4. A Shipload of Rice (1990)
5. Mr. B.'s Mattress (1992)
Mr. B. Again (1989)
Mr B. Is Dead (1990)
A Bride for Mr B. (1993)
Mr B. (2000)