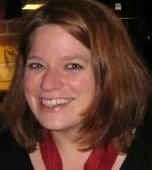 Many authors claim to have known their calling from a young age. Liz Schulte, however, didn't always want to be an author. In fact, she had no clue. Liz wanted to be a veterinarian, then she wanted to be a lawyer, then she wanted to be a criminal profiler. In a valiant effort to keep from becoming Walter Mitty, Liz put pen to paper and began writing her first novel. It was at that moment she realized this is what she was meant to do. As a scribe she could be all of those things and so much more.
When Liz isn't writing or on social networks she is inflicting movie quotes and trivia on people, reading, traveling, and hanging out with friends and family. Liz is a Midwest girl through and through, though she would be perfectly happy never having to shovel her driveway again. She has a love for all things spooky, supernatural, and snarky. Her favorite authors range from Edgar Allen Poe to Joseph Heller to Jane Austen to Jim Butcher and everything in between.
Series
Ella Reynolds
1. Dark Corners (2011)
2. Dark Passing (2012)
3. Dark Obsession (2015)
4. Dark Shattering (2016)