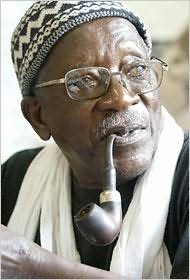 Senegal (1923 - 2007)
Ousmane Sembène, often credited in the French style as Sembène Ousmane in articles and reference works, was a Senegalese film director, producer and writer. the Los Angeles Times considered him one of the greatest authors of Africa and has often been called the "Father of African film."
Novels
God's Bits of Wood (1970)
The Last of the Empire (1983)

Collections
Tribal Scars and Other Stories (1974)