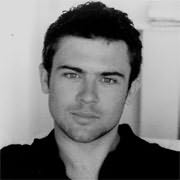 (b.1974)
Owen Sheers is a Welsh poet, author and playwright. He was born in Suva, Fiji, but brought up in London and Abergavenny, and educated at King Henry VIII School Abergavenny, New College, Oxford, and at the University of East Anglia. As an actorhe has played Wilfred Owen on stage, and has also presented arts programmes for BBC Wales.Owen's first novel, Resistance (UK Faber, 2007/ US Nan Talese/Doubleday 2008) will be translated into eight languages. His recent collaboration with composer Rachel Portman, The Water Diviner's Tale, an oratorio for children, was premiered at the Royal Albert Hall for the BBC Proms 2007. Owen is currently a Dorothy and Lewis B. Cullman Fellow at the New York Public Library.

Series contributed to
New Stories from the Mabinogion
1. White Ravens (2010)

Fracture (2020)
Andrés Neuman
"Andrés Neuman is a born storyteller. Fracture is a deeply generous, wise and resonant novel that glides effortlessly between the intimate and the global, the tragic and the comic, all underpinned by Neuman’s electric, ludic intelligence. If you are about to turn the first page, you are very lucky - a reader on the threshold of a book that in the most wonderful of ways will enrich and enlarge your life."
Visitors to this page also looked at these authors
Alice Mattison
Rose Tremain
Edith Wharton
Harry Turtledove
William Trevor
Peter Tremayne
Paul Theroux
Julian Symons
Whitley Strieber
Fred Mustard Stewart
Bruce Sterling
Norman Spinrad
Dan Simmons
Anne Rivers Siddons
Susan Shwartz
Charles Sheffield