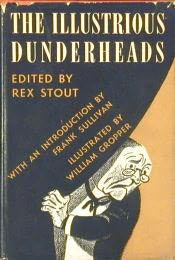 (1942)
An anthology of stories edited by Rex Stout

According to Sullivan and the editor, this book "is a collection of some of the silliest, stupidest, and most dangerous statements that have ever ben made by men laying claim to being leaders of the American people. . .The quotations in this book are only a sampling of the speeches delivered in the halls of Congress and elsewhere by U.S. Senators and Congressmen who have given currency to Nazi propaganda which is designed to bring about the defeat of the United States, the creation of a fascist America subservient to Hitler's Germany.