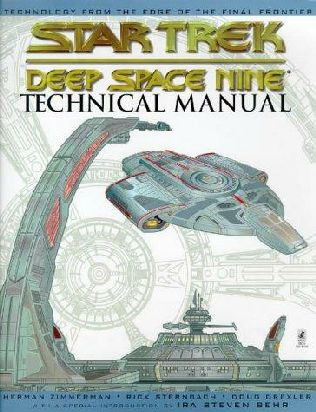 UNLOCK THE SECRETS OF TEROK NOR!

It was once a battered Cardassian ore-processing facility orbiting the planet Bajor. But Terok Nor took on new life when the Cardassians evacuated and were replaced by Starfleet personnel. With the discovery of a nearby stable wormhole connecting the Alpha Quadrant with the Gamma Quadrant, the newly christened Space Station Deep Space 9™ became one of the most important installations in known space.

Filled with hundreds of schematic diagrams and illustrations, the Star Trek: Deep Space Nine Technical Manual is essential for anyone interested in the ships, technology and weapons of Starfleet and the many different species, who frequent the station, including the Klingons, the Bajorans, the Romulans, the Cardassians, and the Jem'Hadar.

As an added bonus, four full-color gatefolds have been specially created for this book. In addition to providing an in-depth look at the exteriors of the station, these illustrations also show the Promenade, and highlight the U.S.S. Defiant.

Turning the ravaged outpost into a fully operational station involved much more than a simple name change. The transformation represented an arduous challenge to the Starfleet engineers who were required to merge two divergent technologies. How they achieved that feat, and how the Federation helps the Bajoran government keep the station running smoothly, is revealed in the Star Trek: Deep Space Nine Technical Manual.